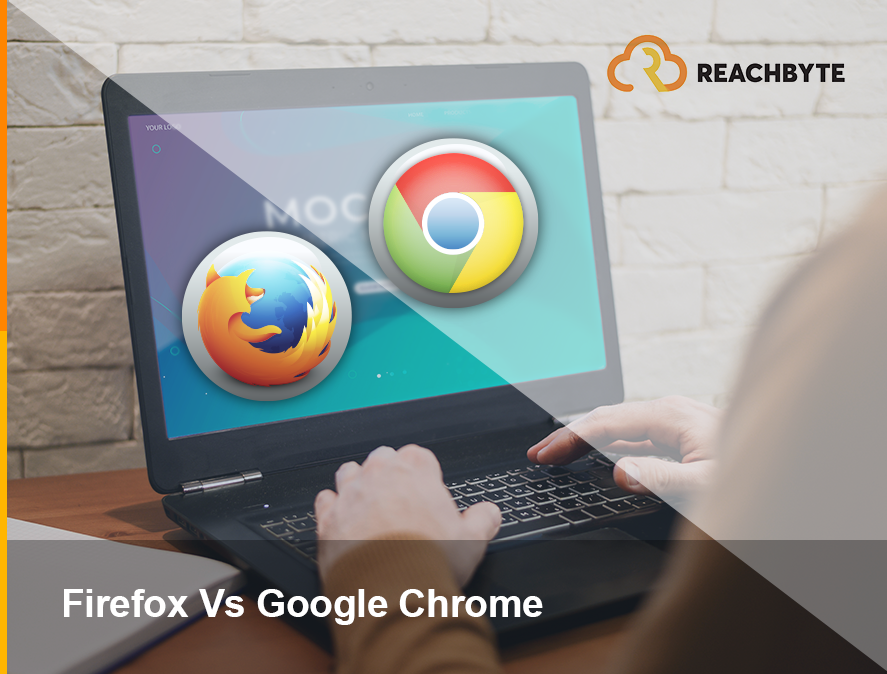 Mozilla Firefox and Google Chrome are two of the most favoured and widely used browsers in the world. Advancement in technology, increase in demand and adoption of the internet, and search for great online experiences gives us a good reason to compare these two browsers side-by-side. In this article, Reachbyte compares Firefox to Chrome in terms of features, performance, security, privacy, and more to help you make an informed decision on which browser you should choose.

In March 2021, the browser market share of Mozilla Firefox and Google Chrome relative to other browsers was as follows:

In March 2011, Firefox’s market share was 28.57% and Chrome share was at 16.55%. When we consider the same in March 2021, Firefox’s share dropped to 3.7%, while Chrome’s share soared to 64.2%. This data shows the tremendous gains Google Chrome has made, mostly at the expense of Mozilla Firefox and Internet Explorer.

The below table illustrates the similarities and differences between Firefox and Chrome and how they stack up against one another.

Mozilla Firefox and Google Chrome interfaces are simple, clean, tidy and have similar design. Both browsers let you easily manage bookmarks, tabs, and search things online. Chrome provides you with a default flat panel design with an address bar that functions as the search bar too. While, Firefox has its own separate address bar and search bar. Firefox browser has a horizontal scrolling feature where you can drag the horizontal scrolling bar and navigate the full page when you zoom out the screen of a web page. However, Google Chrome doesn’t have this feature. The user has to zoom in the page to view the entire webpage, if you zoom out the webpage and exceed the edge of the screen.

You can choose Mozilla as your browser if you like to customize your browser and you understand technology very well. Mozilla offers many useful customization characteristics like personalizable tabs or with adding buttons whereas Chrome doesn’t do well with that. In any case both of them are effortless to manage because searching and tabs are quite simple and easy to use, even though Firefox takes the lead as the horizontal scrolling feature is available when you open several tabs.

In short, if you just want to make a search without any frills Chrome will be the one for you as you don’t have to be a tech addict to manage it. But you should opt for Mozilla  if you want to have a customizable browsing space.

Firefox and Chrome offer many features which makes it nearly impossible for any user to utilize them all. If you want to integrate extensions or add a missing functionality, each browser has its own app store with a library of add-ons.

With a very intuitive synchronization system Google Chrome holds a competitive edge on Firefox. The browser is perfectly integrated with other vital services of the company that in one click it lets you switch to any google service (Gmail, Google Drive, Google Meet , etc…) and to any device.

Chrome’s unique casting feature allows users to search for a video on YouTube or Netflix and play it instantly. If you are a frequent user of this feature then you won’t be able to find the same in Firefox. In Google Chrome, you can set up multiple user profiles as well, for example for personal and work life.

Firefox’s screenshot feature comes in handy as it permits you capture the visible screen, an entire web page or part of a page and save it as an image file. Another noteworthy feature Firefox provides is ‘The Reader View’ with which you can open a clutter-free view of a web page, while hiding the content not related to the main article. Chrome’s  Reverse image search is also extremely useful, whereas Firefox has not given any attention to this idea.

It is quite challenging to compare these two browsers based on features that are integrated into them. Each and every element that has been embedded in them has its own meaning and  purpose. Although, it all finally comes down to the user’s preference.

Security offered by a browser is the main criteria to look at if you want to be safe when you’re browsing on the internet. Mozilla as well as Chrome are safe browsers that guarantee password protection, security extensions, pop up blocking, an anti phishing system and shield against dangerous websites.

Both Firefox and Chrome warn users before opening websites that are not SSL/TLS-encrypted and that do not transfer data over HTTPS. Firefox and Google automatically checks a Google database of malicious websites to safeguard  users from spam, fraud or malware. With Firefox, you can use a master password to all passwords saved in it, while in Chrome saved website passwords are protected by your device credentials.

Password checker feature in Chrome is interesting as it warns when you log in on a website where credentials are known to be compromised. Firefox offers a similar password-checking feature. What’s more, when users try to open a connection that is not secure in Chrome and an insecure connection warning feature pops up that is more clear and visible. Chrome individually processes every running tab which enables it to stay ahead of its competitors.  Hence, in regards to security, Google Chrome does a better job.

Nonetheless, Firefox takes a competitive edge with its built-in anti-tracking feature available on all supports. Chrome doesn’t offer it in its default settings and for a good anti tracking feature in Chrome you’ll have to install an extension for it.

Firefox being a nonprofit company does not make any revenue from ads, which means that users can trust Mozilla when it talks about protecting user data. Besides as it never shares user’s data to any third parties which makes it users comfortable to share their personal info on Firefox.

Google earns most of its revenue through advertising that uses large amounts of data. Google gathers user information that include everything from location, search history to website visits. Google has stated that the entire data collected will be utilised to offer better services to its users. Although, it can be used for promotional purposes that sells their services to users.

Nevertheless Chrome’s Incognito mode and Private browsing in Firefox offers their users modes designed to leave no trace of browsing activity.  Despite the fact that Chrome doesn’t do much to protect the user’s privacy, it alerts users when a website accesses your location or uses your camera or microphone.

All this in regard, Chrome lags behind Firefox in guarding user data and privacy.

Another key parameter while choosing a browser is its performance. In general, both Firefox and Chrome deliver good web browsing performance and speed.  Being the most used browser across the world a large share of websites are made for Chrome. It can result in creating issues for Firefox on reading some websites correctly. Firefox reads a website page after it is completely loaded whereas Chrome lets you navigate  even if the page has not been fully loaded.

Both web browsers organize open web pages using tabs, which permits you to open as many websites  at the same time. In Chrome, the tabs get smaller, while Firefox keeps a minimum size for the tab.  As the number of open tabs increases, Firefox scrolls horizontally. With multiple tabs, the open title of the website title is always visible in Firefox, whereas in Chrome, you have to identify the icon (“favicon”) to understand which website it is. You may accidentally close many tabs by double clicking as the tab becomes tiny in Chrome.

One of the biggest claims made by Firefox is that, compared with other browsers such as Chrome, it uses thirty percent less RAM. It implies Firefox won’t slow down your computer when you open a large number of tabs in your browser. However and against all the evidence, many studies have shown that Mozilla consumes your computer battery faster when compared to Chrome.

Firefox and Chrome are equally dedicated to offer a flawless browsing experience as they keep working on eliminating their weakness. But deciding which browser to use will ultimately come down to personal preferences.

When the security settings are fully optimised, the difference between Firefox and Chrome are quite narrow. Firefox holds an upper hand when it comes to performance and privacy. Whereas Chrome does well on key parameters such as user experience and security. With its first class malware detection rate, many cyber security experts regard Chrome to be the market leader for a range of anti-malware threats that a user faces while browsing.

As Chrome has a larger market share to Firefox, Google has a notable influence on where web technologies are headed. Thus making web apps and websites to work significantly better on Chrome compared to other browsers. If you’re still stoked about privacy, you should consider that Chrome welcomes trackers from websites which many think are private. If you don’t worry much about the privacy implications and prefers simplicity over freedom Chrome is your answer.

Reachbyte hopes that our assessment opens a new outlook on Firefox and Chrome to the users that use these browsers everyday.